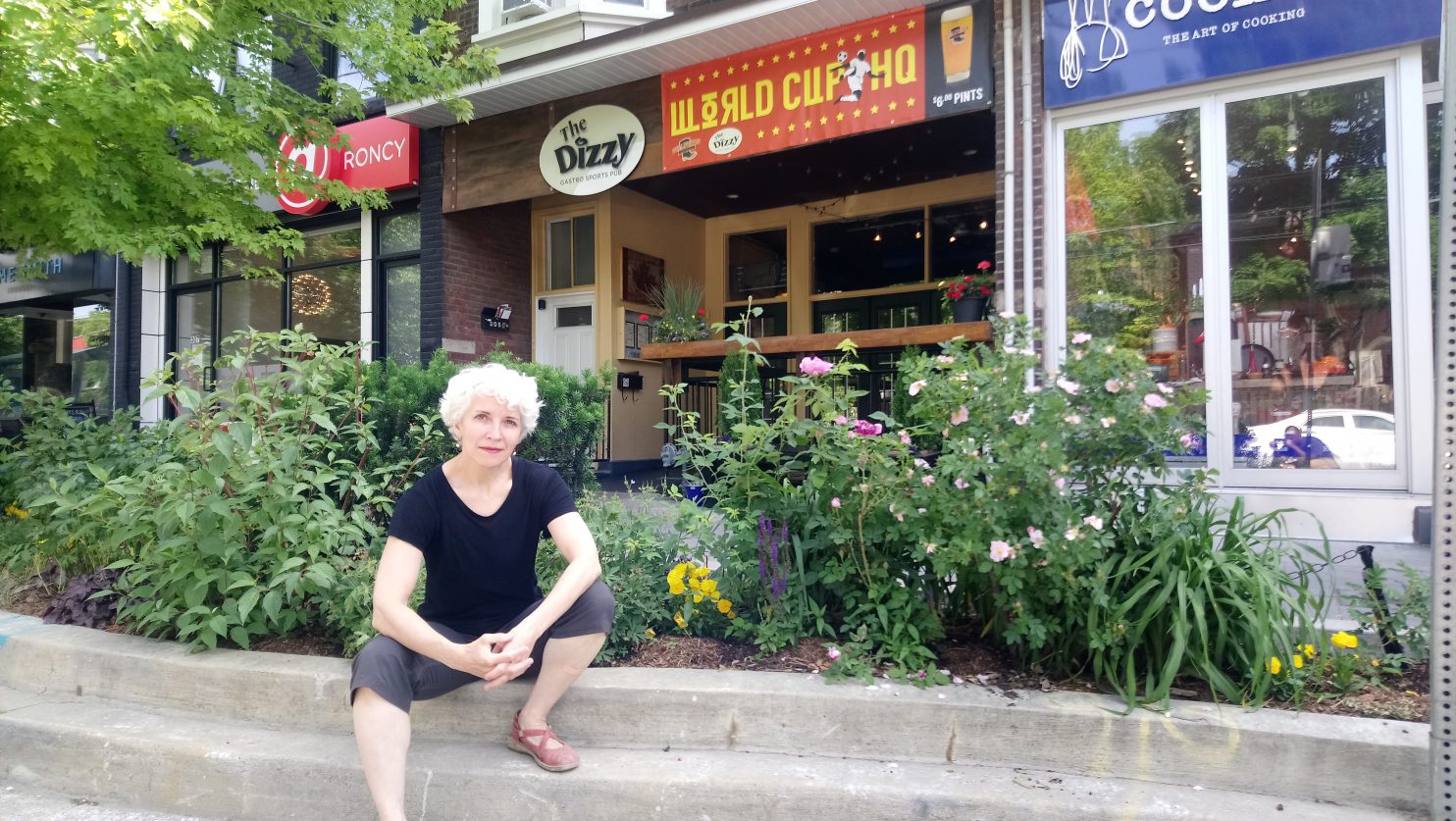 In celebration of Garden Days 2018, the Roncesvalles Village BIA is showcasing the dedicated community members who maintain our sidewalk gardens and beautify our vibrant street.

Mary Wiens has been a volunteer gardener with RoncyWorks since the community group was established in 2011. Mary helped launch RoncyWorks because “she was excited to continue involvement with other people in the community who had been meeting to discuss some improvements to the public realm along Roncesvalles”. Mary maintains the garden at 305 Roncesvalles in front of The Dizzy Gastro Sports Pub.

During her time on the Roncesvalles Renewed committee, Mary and her fellow residents advocated for improved greenery on the street. Through community engagement and partnerships with local officials, Roncesvalles Renewed secured funding for various beautification initiatives proposed by residents. This included 21 new garden beds and “better planting of street trees, which at that time struggled to survive in small concrete planter boxes that were both an impediment and an eyesore along Roncesvalles.”

RoncyWorks sprung from Roncesvalles Renewed in 2011, after committee members and residents expressed interest in maintaining the new gardens. “Using the friendships and relationships we’d forged in that process, it made sense to build on them, by creating teams to tend the new garden beds.”

For Mary, developing friendships with RoncyWorks volunteers and community members has made public gardening especially rewarding. “I’ve met some of the best people in the neighbourhood through this community work, and my encounters with a growing circle of friends any time I go out on Roncy are enormously enriching.” It is this sense of community that also makes each of the gardeners’ beds unique in Mary’s view. “The tough little rose bushes in my bed in front of The Dizzy surprise and delight me every year, as do the plants tended by my fellow gardeners. The planting beds have a charm and personality that you don’t see in professionally maintained beds tended by the city’s parks and rec department.”

Of course, overseeing a public garden is not easy. It requires flexibility and patience. However, learning from one another has allowed Mary and her fellow gardeners to overcome the challenges affecting their gardens. “We share our victories and failures — everything from painting butt tins to a good rainfall, to our battle with dogs and vandals — with each other online. We take the vandalism,the dogs and the cigarette butts more personally. But we also take every good rainfall and every compliment from a passerby more personally as well.”