Jim Bravo majored in drawing and painting at OCAD University. Since completing his studies, Bravo has worked on over 30 public mural and many private large-scale commissions. Through local arts organizations, Bravo has also served as an arts mentor for several at-risk youth initiatives. Originally born in Ecuador, Bravo has lived in the Parkdale—High Park area for the last 30 years. Jim collaborated with lead artist Philip Cote on the mural created at Garden and Roncesvalles Avenues, commissioned by the Roncesvalles Village BIA in Partnership with StreetARToronto. 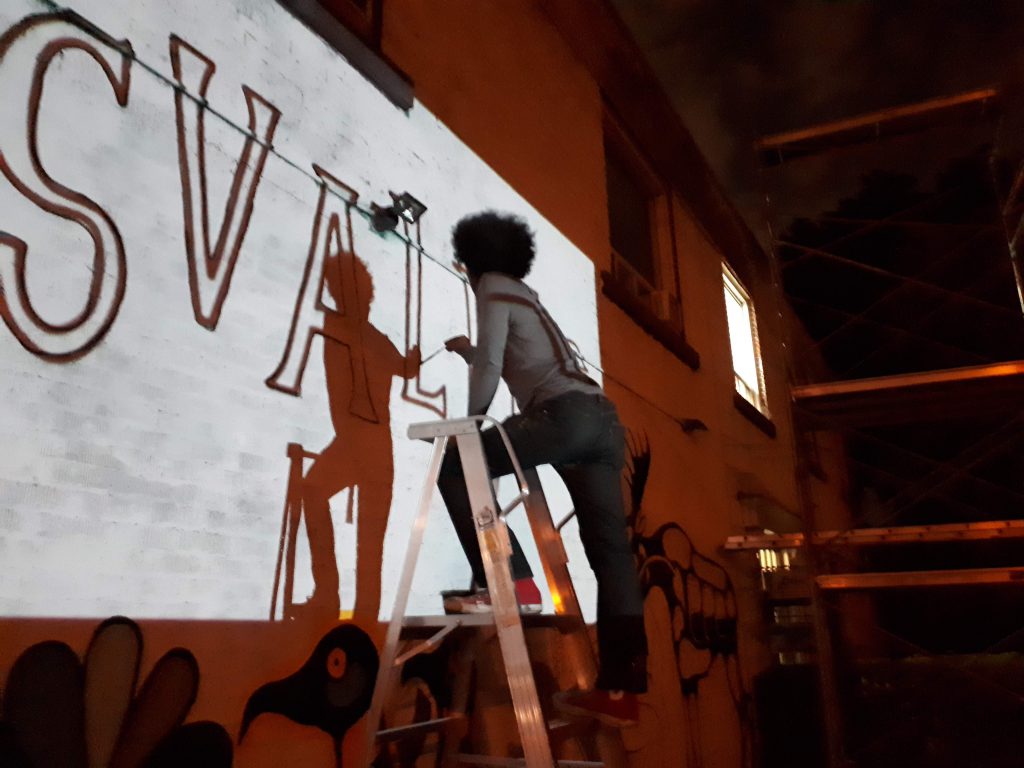 Jim Thierry Bravo at work on new mural at Garden and Roncesvalles. July 2018.

I have been given a great and honourable artistic challenge. Artistic collaborations are a delicate dance of two visions. My vision for this design comes, I hope, as a sensitive and complimentary response to Mr. Cote’s narrative on the First and Founding Peoples of this region of our City/Province, etc.  Through an interplay of bold, highly stylized and graphic illustration (as a method through which to correspond with Cote’s Woodlands approach) I have chosen to present a take on what I feel are the three founding attributes of what is at present known as Ward 14/Parkdale-High Park. These three attributes are the waterfront, the long-standing local architecture which has witnessed the coming and going of many different settlers, and the wide natural array of trees, flowers and plant life.  The arrangement of the word “Roncesvalles” is designed to invoke a feeling of movement, change, development, space and inclusion, but ultimately that something is about to eventually settle down – only to be carried off again through progress, symbolized by the land rising out of the water.  I have decorated the word with flowers and plants found in the area and it is these swooping components that propel the word — and thus the community — into the present day. On close inspection various “umbilical” lines stemming to and from the text are placed as connection portals to Mr. Cote’s surrounding narrative.

Jim Thierry Bravo’s works and CV can be viewed at: www.JimBravopaintings.weebly.com