As an Indigenous artist and graduate of OCAD University’s Interdisciplinary Master’s in Art, Media and Design, Philip Cote uses his research and art to unearth and reveal his cultural experience and knowledge of signs of Indigenous symbols, language and interpretation. According to Cote, “The Seven Fires Prophecy of the Anishnaabe-Ojibwe people encourages the union of all peoples of the human race to ensure a kinship that will lead to peace and harmony.” Phil Cote lived on Roncesvalles Avenue for 3 years and remains involved in the community. Phil is the lead artist on the mural at Garden and Roncesvalles Avenues, commissioned by the Roncesvalles Village BIA in Partnership with StreetARToronto. and created from July to October 2018, in collaboration with mural artist Jim Thierry Bravo. 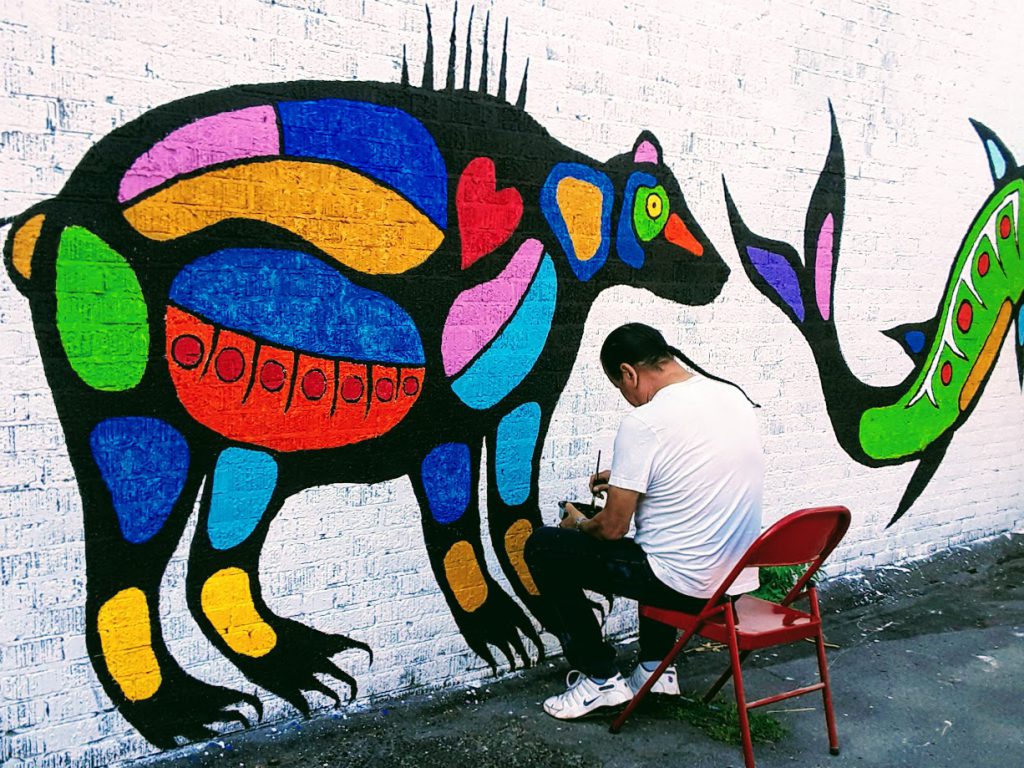 Philip Cote working on the mural at Garden and Roncesvalles Avenue. Sept 2018.

Philip Cote Artist Statement for Mural at Garden and Roncesvalles

The vision of my work starts with a journey into Indigenous history of this land that dates back 130,000 years and maybe even 200,000 years. The first humans in North America we call the Original People also known as the Anishinaabe “From whence lowered the original man”.

On the design of this mural at Garden and Roncesvalles Avenue, we have first man and woman taking that first journey across the land and in communion with all life as displayed here by the animals, plants and the Anishinaabe Spirit World.

The design is deeply connected to the creation story of the Anishinaabe as this design with all its black lines speak about the beginning of the universe. In the beginning there was a great black void and in that void there was a spirit who sent out thoughts into the Universe. When no response happened, those thoughts were called back, and the creator said create light as you come back to me. Thus all the stars were born and from them planets were formed.  At the moment we have light and dark in the Universe, for Anishinaabe people believe we are all made of light and dark physical and spirit.

The painted imagery is in the style of woodland painting first created by Norval Morrisseau, an Anishinaabe artist and visionary his work brought the Anishinaabe (first people’s) world into public space in the 1960s. Norval had a deep understanding of the history of the Anishinaabe and created such a stir in the western culture at that time — and in his own community, which was upset that he shared those secret stories with the outsiders. His work describes the culture and mystery of the Anishinaabe people that gives everyone a clearer understanding of who these first people really are.

We have stories of prophets who came to the people a millennium ago to give visions of the future and would come in stages called the Seven Fires. In recent times there has been a talk of an Eighth Fire in which the ancestor prophets say that to light the Eighth Fire Indigenous People will come forward with their knowledge connecting with the western knowledge and from this union a new people will emerge lighting the Eighth and final Fire. This will begin the golden age of peace.

My work reflects this same importance of sharing the story of ancient Anishinaabe footsteps that crossed Roncesvalles in days gone by. It’s inspiring to know that we the Anishinaabe Peoples are still here sharing stories/oral histories much as our ancestors did for thousands of years and thus bringing the values of our culture into the present day and breaking down the stereotypes and racism that still prevails today. I am happy to be part of these changes in our country called Canada.

Philip Cote’s works and CV can be viewed at:  www.tecumsehcollective.wixsite.com/philipcote